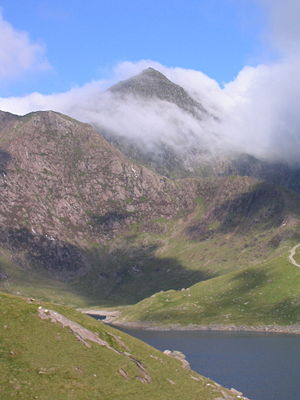 Scotland, England and Wales are all visible

from the Summit of Snowdon, as well as 24 counties,

The Highest Mountain in Wales at 3,560 ft

Snowdon, the highest mountain in Wales and the highest British mountain south of the Scottish Highlands, is "probably the busiest mountain in Britain". It is located in Snowdonia National Park (Welsh: Parc Cenedlaethol Eryri). The summit is known as Yr Wyddfa, Welsh for "the tumulus", and lies at an altitude of 1,085 m (3,560 ft) above sea level.

As the highest peak in Wales, Snowdon is one of three mountains climbed as part of the National Three Peaks Challenge. The English name Snowdon comes from the Saxon "Snow Dun", meaning "snow hill", although the amount of snow on Snowdon in winter has been decreasing recently, having dropped by more than 55% since 1994.

Snowdon has one of the wettest climates in Great Britain, receiving an annual average of more than 4,500 mm (180 in) of precipitation.

The first recorded ascent of Snowdon was by the botanist Thomas Johnson in 1639. However, the 18th-century Welsh historian Thomas Pennant mentions a "triumphal fair upon this our chief of mountains" following Edward I's conquest of Wales in 1284, which, if true, indicates the possibility of earlier ascents.

The many steep cliffs in the Snowdon range are significant in the history of British rock climbing. The first recorded climb in the area was the 1798 ascent of the Eastern Terrace of Clogwyn Du'r Arddu (Welsh: the black cliff of the dark(ness)) by the Reverends Peter Williams and W. Bingley, botanists looking for alpine plants. The north face of Y Lliwedd was explored in the late 19th century and in 1909 was the subject of the first British climbing guide, The climbs on Lliwedd by J. M. A. Thompson and A. W. Andrews. Also, Edmund Hillary trained here for his climb up Mount Everest.

Snowdon has six ridges. These are steep and rocky to the north and east, shallower and grassy, but more remote to the south and west. There are many cwms formed by glaciation in the ice age, some filled with tarns (meltwater lakes). Subsidiary summits include Garnedd Ugain (1,065 m), the knife-edge summit of Crib Goch (923 m), Y Lliwedd (898 m) and Yr Aran (747 m).

Snowdon offers some of the most extensive views in the British Isles; on exceptionally clear days, Ireland, Northern Ireland, Scotland, England and Wales are all visible, as well as 24 counties, 29 lakes and 17 islands. It is also possible to view the newly built Beetham Tower in Manchester from here. The view between Snowdon and Merrick (southern Scotland) is the longest theoretical line of sight in the British Isles at 144 miles (232 km).

Routes to the summit

Marked footpaths lead to Snowdon's summit from all sides , and can be combined in various ways. The circular walk starting and ending at Pen-y-Pass and using the Crib Goch route and the route over Y Lliwedd is called the Snowdon Horseshoe. The routes are arranged here clockwise, starting with the paths leading from Pen-y-Pass. During winter, all these routes become significantly more difficult.

The southernmost of the paths leading from Pen-y-Pass leads up Y Lliwedd, to the south of Llyn Llydaw, and from there over Bwlch Ciliau (Welsh: variously pass of corners/nooks or pass of retreat), where the Snowdon Ranger paths joins with it, to Snowdon itself. Shortly before the summit, this path merges with the Rhyd Ddu path. This is one half of the Snowdon Horseshoe, together with the Crib Goch route (see below). It includes a sharp ridge and requires some experience of scrambling and a head for heights.

The Pyg Track is a popular path leading from the car park at Pen-y-Pass along the lower slopes of Crib Goch before zig-zagging above the smaller lake Glaslyn to the col between Snowdon and Garnedd Ugain and thence to the summit of Snowdon.

Regarding the name of the Pyg Track, the web site of the Snowdonia National Park Authority states;

"No one is certain how the Pyg Track came by its name; possibly from Bwlch y Moch (Pigs' Pass) over which it passes. (It is sometimes spelt Pig Track). "Pyg" in Welsh also means 'pitch' and may refer to the dull black pitchy appearance of the path in one location; or it may have been the route used to carry pitch up to the copper mines. A third possibility is that it was named after the Pen-y-Gwryd Hotel nearby, by the early climbers who stayed there."

The Crib Goch route forks off upwards to the right from the Pyg route after roughly a mile (1.6 km), whilst the Pyg route itself carries straight on, initially dropping down slightly onto a flatter section of path before the ascent towards the zig-zags. Some less experienced walkers have been known to get confused at this point, later finding themselves out of their depth on Crib Goch.

The Miners' Track begins at the southern end of the Pen-y-Pass car park. After approximately 750 m to 1 km, it passes above Llyn Teyrn and then continues for another kilometre before reaching the shore of Llyn Llydaw. After crossing Llyn Llydaw and following it around, the track rises more steeply and eventually leads to Glaslyn (Welsh: blue lake). The final part of the Miners' Track consists of a scramble from the edge of Glaslyn onto the latter part of the Pyg track, although recent step-building has improved this considerably. The combination of ascent via the Pyg track and descent via the Miners' track is one of the most common ways of combining routes on Snowdon, due to their sharing a start point at the Pen-y-Pass car park.

The Crib Goch route also starts at the Pen-y-Pass car park and initially follows the Pyg track before separating off from it at the Bwlch y Moch and leading up the side of Crib Goch. From there it follows the ridge of Crib Goch, over the summit of Garnedd Ugain and on to the summit of Snowdon. This forms half of the Snowdon Horseshoe route, the other half passing over Y Lliwedd (see above). It includes a very sharp ridge and requires some experience of scrambling and a head for heights. It should not be attempted in high winds or rain. In winter it is classed as a full climb requiring appropriate equipment and skills.

The Watkin Path has the greatest change in altitude out of all the paths up Snowdon. Starting at 60 m above sea level at the Nantgwynant car park (SH628506) south of Snowdon, and finishing at Snowdon's 1085-metre high summit, the Watkin Path has a height gain of 1025 m. It follows the course of the Afon Cwm Llan river, past the Gladstone Rock, before heading up the hillside to Cwm Ciliau (between Y Lliwedd and Snowdon) and onward to Snowdon. It is also possible to walk from Nantgwynant to Bwlch Cwm Llan, between Yr Aran and Snowdon and from there, either down to Rhyd Ddu or along Allt Maenderyn, along the top of the Clogwyn Du cliff face to meet the Rhyd Ddu path going to the summit. During the summer, apart from views of the surrounding Welsh countryside, plenty of tourists take to "cooling down" in the local waterfalls, part of the way up the path.

The Rhyd Ddu path leads from the village of Rhyd Ddu to the west of Snowdon, gently up on to Llechog, a broad ridge to leading west from the summit of Snowdon. This is one of the easier routes up Snowdon. It is also possible to walk from Rhyd Ddu to Bwlch Cwm Llan, between Yr Aran and Snowdon and from there, either down to Nantgwynant, or along Allt Maenderyn, along the top of the Clogwyn Du cliff face to meet the Rhyd Ddu path going to the summit. All walkers tread carefully at the last 100 metres or so because of a steep slope with scree. This is the path, but it is potentially dangerous.

Another branch, the Beddgelert branch or Pitt's Head path, begins at Pitt's Head on the A4085 road.

The Llanberis Path leads from Llanberis, approximately along the course of the Snowdon Mountain Railway. This is one of the longer routes up, although as the slope is mostly comparatively shallow, it is considered one of the easiest. It is also the path followed during the annual Snowdon Race (Welsh: Ras Yr Wyddfa). The first part of the path also leads to the well-known climbing cliff Clogwyn Du'r Arddu. Refreshments are available in a small café next to the path, about half-way up the mountain. 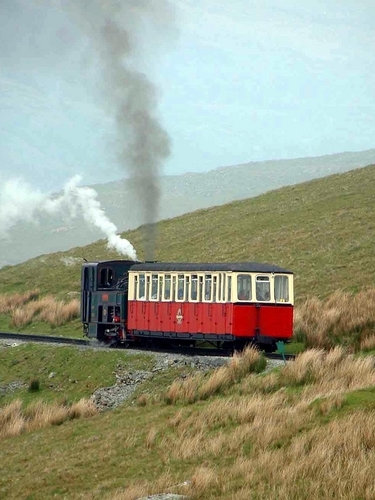 For those who do not wish to or are not able to walk, or wish to walk one way only, the Snowdon Mountain Railway (a rack railway) runs from Llanberis to the top. A restaurant and shop can be found at the top station, just below the summit.

Until the opening of the new Summit Building in spring 2008, the train will terminate at Clogwyn, weather permitting.

A popular pastime for Welsh climbers has been to use large smooth stone with notches in to ride down the rails of the track, often resulting in near misses with the tourist trains. However this activity has almost stopped since most of the good stones are now at the bottom of the hill.

When the Snowdon Mountain Railway was opened in 1896, a hotel was built at the terminus, a short distance from the summit. In the 1930s, this was replaced by a restaurant designed by Sir Clough Williams-Ellis. By the end of the twentieth century, this was run as a café and shop complex (selling, amongst other things, "I Climbed Snowdon" T-shirts). However it was becoming increasingly dilapidated and was described by Prince Charles as "the highest slum in Wales". Its state led to a campaign to replace the building. In April 2006, Snowdonia National Park Authority agreed a deal to start work on a new café and visitor centre complex costing £8 million. By mid-October 2006 the old building had been largely demolished. The new visitor centre will be erected during 2007 and formally opened in Spring 2008, and will be named Hafod Eryri

The old building displayed a slate plaque with the following couplet - "Grwydryn, aros ennyd; ystyra ryfeddol waith Duw a'th daith fer ar y ddaear hon." (Wanderer, wait a moment; consider God's wonderous work and your short journey on this earth.) The Welsh National Poet Gwyn Thomas has composed a new couplet for the new building - to be displayed at its entrance, and on the windows - and this will read "Copa'r Wyddfa : yr ydych chwi yma, yn nes at y nefoedd." (The summit of Snowdon : you are here, nearer to Heaven.)